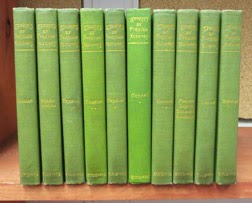 In 1898, the publisher Charles Scribner’s Sons put out a ten-volume series entitled Stories by Foreign Authors. Each book in the series is a collection of four to six works of European short fiction in English translation, focusing on a different country or region. The breakdown of the ten volumes is as follows. All ten books have been reviewed individually at Old Books by Dead Guys. Click on the links below to read the full reviews.

Altogether the ten volumes contain 51 stories by 48 authors, providing a broad and varied overview of European literature in the 19th century. The selections are a pleasant mix of household names (e.g. Zola, Balzac, Tolstoy), Nobel laureates (Bjørnson, France, Heyse, Maeterlinck, Sienkiewicz), lesser-known luminaries, and a few writers who have since faded into obscurity. The best books in the series are the French and Scandinavian volumes. The worst volume, by far, is the Russian volume. Though it features four literary superstars, the editors may well have chosen the most boring stories from each. Despite this one disappointment, the other nine volumes each have their own hidden treasures. If you are interested in classic literature—Romanticism, Naturalism, early Realism—this series is a great way to sample and discover new authors you may not have encountered before.

These books are in the public domain and can be read online and downloaded for free at various sources. For some unexplained reason, Project Gutenberg and Amazon do not have the three French volumes, though they do have the other seven. Wikisource has several volumes, including the French:

If you’re intimidated by the thought of reading ten volumes, you don’t have to, because Old Books by Dead Guys has already done it for you! Below is a list of the ten best stories in the series. These are the ones you just can’t miss.

“Christian Gellert’s Last Christmas” by Berthold Auerbach
from Stories by Foreign Authors: German II
When a peasant is touched by a passage of verse, he makes a pilgrimage to a local university to thank the author in person.

“The Massacre of the Innocents” by Maurice Maeterlinck (Belgian)
from Stories by Foreign Authors: Polish, Greek, Belgian, Hungarian
After a farmer is robbed and his wife and daughters killed, the enraged inhabitants of a Belgian village attack the Spanish soldiers responsible for the act.

“San Pantaleone” by Gabriele D’Annunzio
from Stories by Foreign Authors: Italian
When the sky inexplicably turns blood red, a mob of fanatically religious folk seek solace in their priest, their relics, and their superstitions.

“The Necklace” by Guy de Maupassant
from Stories by Foreign Authors: French I
A poor woman longs for the luxury and status of a high-class life. When her husband is invited to a ball by his employers, she sees the chance to live her dream, if but for one night.

“Laurette or the Red Seal” by Alfred de Vigny
from Stories by Foreign Authors: French III
An old soldier recalls a story from his naval days when he captained a ship transporting prisoners to the penal colony of Cayenne, Guiana.

“When Father Brought Home the Lamp” by Juhani Aho (Finnish)
from Stories by Foreign Authors: Scandinavian
When a poor family becomes the first in their town to purchase an oil lamp, it becomes an immediate status symbol, elevating them in the eyes of their neighbors.

“The Philosopher’s Pendulum” by Rudolph Lindau
from Stories by Foreign Authors: German I
After having lived a life of disappointment and heartbreak, a man adopts a personal philosophy by which he expects nothing and therefore feels nothing.

“The Substitute” by François Coppée

from Stories by Foreign Authors: French II
A petty criminal, raised in reform schools and prisons, decides to turn his life around, gets a real job, and forms a close bond with a new friend.

“Moors and Christians” by Pedro Antonio de Alarcón
from Stories by Foreign Authors: Spanish
The owner of a historic estate finds an old parchment on his property. He suspects it to be a treasure map, but, unable to read Arabic, he must first have it translated.

“The Railroad and the Churchyard” by Bjørnstjerne Bjørnson (Norwegian)
from Stories by Foreign Authors: Scandinavian
Two close friends suddenly find themselves at odds in a power struggle over local politics. Matters reach a boiling point with the proposal of a new railroad through town.

I have recently learned that this series was a follow up to two previous series published by Charles Scribner’s Sons, Stories by American Authors and Stories by English Authors. Together they add up to twenty more volumes of 19th-century literature, all available for free download from Amazon or Project Gutenberg. Look for them in upcoming posts at Old Books by Dead Guys.