Brief overview of a Canadian master

The band of painters known as the Group of Seven are the most highly regarded, widely known, and minutely studied figures in the history of Canadian art. They are generally credited with establishing a distinctively Canadian style of visual art that helped Canada forge a national identity in the early 20th century. A.J. Casson (1898-1992) was the youngest and last surviving member of the Group. He was not a founding member, but was invited to join in 1926 after one of the original members resigned. Thus Casson doesn’t quite enjoy the respect of full membership, and though many beautiful books have been published on the Group of Seven, he is often given the short shrift and sometimes barely mentioned at all.

A.J. Casson: An Artist’s Life was published in 1998 by the McMichael Collection of Canadian Art to accompany a traveling exhibition of Casson’s work. Though only 64 pages long, it is a pleasure to see an entire book devoted to Casson, who happens to be one of my favorite artists in the Group of Seven. Franklin Carmichael, a founding member of the group, served as Casson’s mentor, both in their day jobs as graphic artists and in their moonlighting as fine artists. The two share a similar style, and their work is generally less impressionistic and more graphic or illustrative than the other members, with Casson’s paintings even more consciously designed than those of Carmichael. If A. Y. Jackson were the Marsden Hartley of the Canadian landscape and Lawren Harris its Rockwell Kent, Casson might be its Grant Wood or Charles Sheeler. The selection of Casson’s works in this book is about evenly split between his paintings of small Ontario towns and his more mystical-looking uninhabited landscapes. Several examples of watercolors are shown, as well as one print, one drawing, and a few examples of his commercial graphic art. Unfortunately, about half the images are reproduced in black and white. While this is often a necessary cost-saving device, it really prevents the book from being a timeless and essential document of Casson’s life and work.

The text by curator Christopher E. Jackson amounts to about 16 pages of text and therefore can’t be considered a complete biography. It reads more like an artist’s resume that has been fleshed out with more detail. You don’t really get considerable insight into what Casson was like as a human being, but you do learn a lot about his career. What surprised me most was the level of underappreciation and lack of financial success Casson experienced during his lifetime, as he was always regarded as a second-string player in the Group of Seven. Not until all of the other members died was he really recognized as an elder statesman of Canadian art, and he wasn’t able to retire from his graphic art job until he was 60. That’s difficult to comprehend given how the Group of Seven are regarded as national treasures today.

This book is probably not the most authoritative work on Casson. Eminent Canadian art critic Paul Duval published at least three previous books on the artist and his work. Most books on Canadian art, however, were printed in small runs, are now out of print, and copies are either difficult to track down or expensive to purchase. As an American fan of the Group of Seven, I often find that I have to settle for whatever I can dig up in university libraries, and one could settle for a lot worse than A.J. Casson: An Artist’s Life. Though one wishes it were printed in full-color throughout and more extensive in its scope, it’s still a very attractive book, and it did provide me with a more thorough education on Casson than I could find elsewhere. 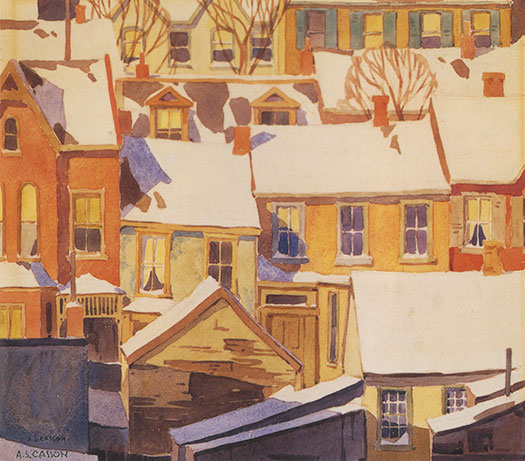 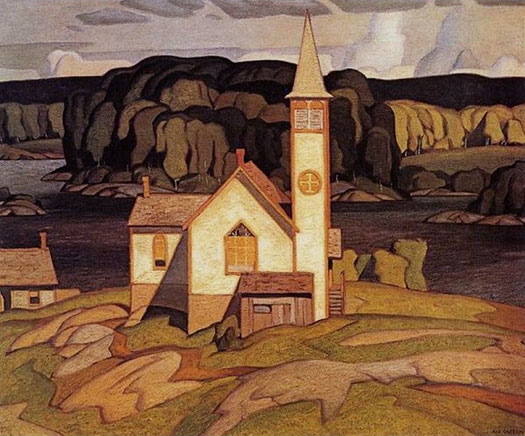 If you liked this review, please follow the link below to Amazon.com and give me a “helpful” vote. Thank you.
https://www.amazon.com/review/R1LX4TY2ABJONW/ref=cm_cr_othr_d_rdp_perm
Posted by Karl Janssen at 5:30 AM