Making the most of the medium

Hans Alexander Mueller was a German-born artist and arts educator who emigrated to America in his late forties. He then embarked on a successful career as a book illustrator of classic novels like Treasure Island and Don Quixote. Among his students was Lynd Ward, one of America’s great woodcut artists. Like Ward, Mueller’s media of choice were the woodcut and the wood engraving. In 1939 Mueller published a book on the subject, Woodcuts and Wood Engravings: How I Make Them. In 2006, Dover Publications republished the book under the title of Making Woodcuts and Wood Engravings: Lessons by a Modern Master. The book is only about a hundred pages in length, and much of that is occupied by illustrations.

I had never heard of Mueller before finding this book, but the slim volume is illustrated with many examples of his work that show him to be an expert at his craft. Many examples of both black-and-white and color prints are provided. When the latter are displayed, the book shows the individual color separations as well as the final print with all colors combined. Judging by Mueller’s work, he appears to have been influenced by the German Expressionists, but his style is less angst-ridden and more picturesque. As a book illustrator, Mueller’s name is not as well known as those of Rockwell Kent, Lynd Ward, or Barry Moser, but the best of his work can certainly hold its own among those illustrious wood engravers. More importantly for the reader, Mueller is also a very competent writer with some interesting perspective to offer on the art form of the woodcut.
When one thinks of the great painters of modern art, very few if any ever wrote a how-to manual on painting. When it comes to woodcuts, linoleum cuts, or wood engravings, however, a whole slew of expert artists of the medium’s heyday in the late 19th and early 20th centuries wrote instructive books on their methods and techniques of relief printing. These how-to manuals are generally very brief, heavily illustrated, and intended to initiate newcomers into the art form. As a hobbyist in this medium myself, I have read a few of these printmaking guides by such artists as William S. Rice and Walter J. Phillips. Mueller is one of the better writers in this field. Rather than dwelling too much on the technical basics of how to cut wood or print an image, he puts more emphasis on the planning behind a print—its lines, forms, textures, and colors.

Mueller discusses what makes the woodcut different from other art forms and how to take best advantage of the medium. On the subject of color woodcuts, he scoffs at the idea of a dominant black key block merely colorized by auxiliary plates. Instead, he believes all colors should work together as an integrated whole, with each plate crucial to the rhythm of the design. Mueller treats the woodcut and wood engraving as two separate media, exploring the advantages of each in separate chapters. He also includes a brief chapter specifically about book illustration, which is unusual for printmaking manuals of this kind.

The only disappointing aspect of Mueller’s book is its brevity, a fault shared by most woodcut manuals. This book is intended to provide the curious artist with just enough education to forge his own path in the medium. The eloquent wisdom that Mueller dispenses on the subject, however, makes the reader wishing for further instruction from this modern master.
If you liked this review, please follow the link below to Amazon.com and give me a “helpful” vote. Thank you.
https://www.amazon.com/review/R36VFPDFGOLO0P/ref=cm_cr_srp_d_rdp_perm
Prints by Hans Alexander Mueller 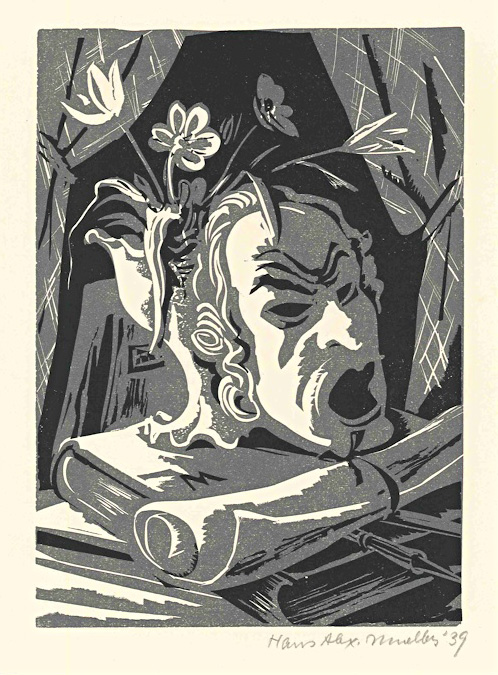 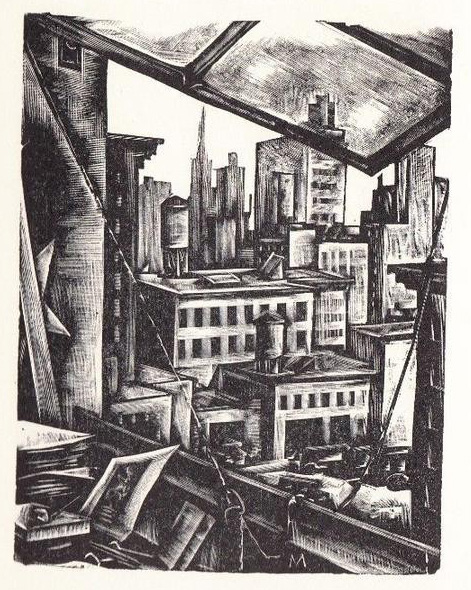