Mischievous Swiss kids
Swiss writer Carl Spitteler won the 1919 Nobel Prize in Literature, primarily on the strength of his poetry, including his epic work Olympian Spring. English-language readers searching for works by the early, lesser-known Nobel Laureates, however, are often at the mercy of whatever obscure gems someone many decades ago happened to consider worthy of translation. In Spitteler’s case, the only work available in English is not a poem but a novel. Originally published in 1907 under the German title of Die Mädchenfeinde, the English version bears the unlikely title of Two Little Misogynists. The 1922 edition published by Henry Holt and Company is a brief book of 132 pages, with around 20 of those pages devoted to illustrations.

Though the title may be a bit off-putting to today’s audience, the two misogynists referred to in the title are merely two young brothers who, like many boys their age, think girls are icky. Gerold, age 10, and Hänsli, age 9, have been spending a vacation at their grandparents’ house in the village of Sentisbrugg, but the time has come for them to reluctantly return to the military school they attend in the city of Aarmünsterburg. Much to their chagrin, they are informed that for a portion of their trip they will be sharing a ride with a girl their age named Gesima, the daughter of an important local magistrate. The novel is a road-trip story detailing the adventures of the three children on this journey.

Though good boys at heart, the brothers are troublemakers to some degree, like a milder version of the Katzenjammer Kids, if anyone remembers that old comic strip. Their first inclination upon meeting Gesima is to pick on her, but over time, not surprisingly, they develop warmer feelings for her. Gesima in her turn begins to show the inklings of feminine wiles and toys with the boys in retaliation. In early 20th-century Switzerland, it apparently took a village to raise the youngsters, because they are shuttled into the hands of a different group of adults with each town they pass through, but they periodically manage to escape to undertake their own independent exploits in the picturesque Swiss countryside.

Two Little Misogynists is mostly charming, sometimes boring, and often seems as if some of its humor has been lost in translation or is just intentionally absurd. There’s nothing particularly wrong with the book, but it never truly impresses either. Mostly it just comes across as a harmless piece of fluff and not the kind of work that would have in any way contributed to Spitteler’s Nobel win. One can venture that the book is perhaps autobiographically based on Spitteler’s own childhood memories of growing up in Switzerland, though with events exaggerated for comedic effect. One doesn’t learn a whole lot about Swiss culture, however. The illustrations probably do more to establish the specificity of the Swiss setting than does the text. One wishes to learn more about the lives of the adult characters, but they exist only in the periphery while the author tells the tale from a child’s perspective. To that end, Spitteler does demonstrate a knack for capturing the naive wonder of the juvenile mind. This brief work of prose may be far from the Nobel-caliber epic verse for which Spitteler is known, but it does make for a pleasantly lighthearted read. 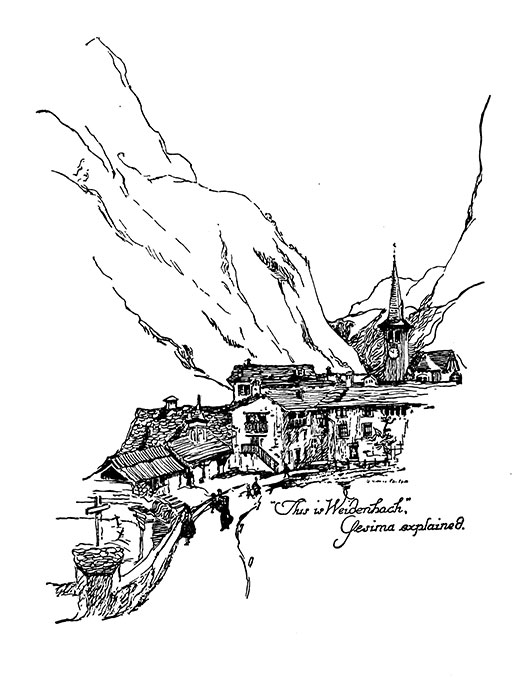 Illustration by A. Helene Carter, from Two Little Misogynists by Carl Spitteler, 1922 English edition published by Henry Holt and Company
If you liked this review, please follow the link below to Amazon.com and give me a “helpful” vote. Thank you.
https://www.amazon.com/review/R5QN9T54W5Q73/ref=cm_cr_othr_d_rdp_perm
Posted by Karl Janssen at 11:14 AM