Ancient math meets modern graphic design
Written around 300 BC by the Greek mathematician Euclid, The Elements has remained the primary textbook for the teaching of geometry for over 2000 years. Nevertheless, the Irish mathematician Oliver Byrne felt that this landmark work could be improved to make it more user-friendly. In 1847, Byrne published his own edition of The Elements, replacing the black-and-white figures that usually accompanied Euclid’s text with color diagrams illustrating each mathematical proposition or theorem. The resulting volume, entitled The First Six Books of the Elements of Euclid, in Which Coloured Diagrams and Symbols are Used Instead of Letters for the Greater Ease of Learners, marks a milestone in the history of book design and infographics. You can view Byrne’s Elements for free at the Internet Archive, but there is now an even better way to experience this clever merging of ancient learning and modern graphic design. American web designer Nicholas Rougeux has recreated Byrne’s Euclid as a website, free for all to read, that adds a dimension of interactivity to the learning process.

Euclid’s original The Elements consisted of thirteen books, but Byrne chose to include only the first six of those books in his 1847 edition. Perhaps he planned to continue in a further volume, or perhaps he felt the first six books would benefit the most form his color treatment. Five of these first six books deal with plane geometry—angles, circles, and polygons. Book V, which deals with proportions, is the anomaly in this set and perhaps gives some indication of things to come in Euclid’s Books VII through X, which are concerned with such topics as number theory, geometric sequences of integers, and prime numbers. Books XI, XII, and XIII deal with the geometry of three-dimensional solids and would have no doubt yielded some impressive illustrations had Byrne chosen to tackle them.

The Elements may be one of the foundational books in the history of mathematics, but as a tool for education it is a bit too cumbersome and perplexing. Thankfully, over the past century Euclid’s knowledge has been distilled into more accessible geometry textbooks. I pity our college-bound great-grandparents who no doubt had to learn directly from Euclid’s cryptic text and perhaps even memorize his axioms and theorems. Book V, on ratios and proportions, is particularly difficult to understand. Euclid’s text is almost unintelligible, and Byrne’s illustrations do little to clarify. The other five books on plane geometry, however, are more interesting, and if nothing else Byrne’s illustrations, like mini works of modern art, are certainly attractive. (In fact, you can purchase Rougeux’s versions in the form of a poster.) Whether Byrne’s colored diagrams significantly enhance the teachability of Euclid is arguable, but they sure are a pleasure to behold.

The Elements is valuable not only for its treatise on geometry but also for its unique structure. In this work Euclid establishes the fundamental framework of logical argument. The method by which he builds upon basic definitions and undeniable axioms to progressively develop and prove more complicated propositions is seen as the gold standard in applied logic and has been used by other scientists and philosophers to construct logical arguments in their own fields, most notably by Baruch Spinoza in his Ethics. This broadens the influence of The Elements far beyond mathematics, making it one of the most important books in Western thought. Even if geometry is not your cup of tea, some exploration of Rougeux’s ingenious website will give you a deep appreciation for Euclid’s impressive achievement, as well Byrne’s ambitious take on it. 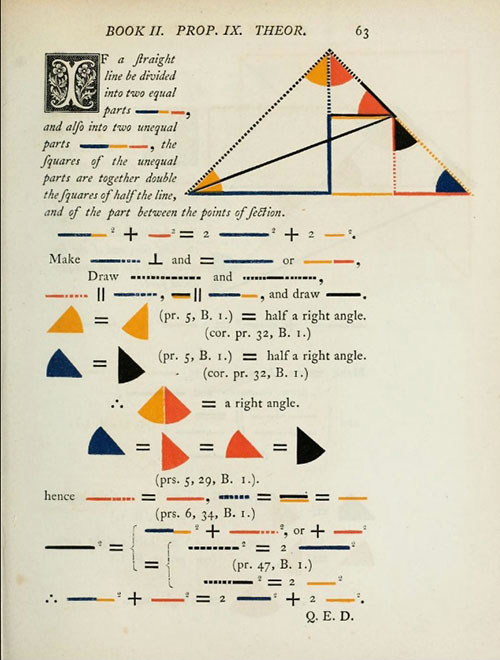