It goes without saying that Sherlock Holmes was the character that made Sir Arthur Conan Doyle famous. The Holmes adventures, however, only constitute a fraction of Conan Doyle’s literary output. Outside of the Holmes universe, the most famous recurring character that Conan Doyle created is Professor Challenger, the hero of The Lost World. Challenger is the world’s preeminent authority on all manners scientific, or at least considers himself to be so, and he has little patience for those who disagree with his theories. He is described as a large man with a “spade-shaped” beard and a quick temper and blustering manner of speech that make him intimidating to all but his closest friends and family. Outside of his study and his laboratory, he is a man of action who, true to his name, never shies away from a challenge.
Conan Doyle featured Professor Challenger in three novels and two short stories. The Lost World, published in 1912, is one of Conan Doyle’s most popular books and has undergone several film adaptations. The rest of Professor Challenger’s adventures, however, have not fared so well. The novel The Poison Belt, published in 1913, features the scientist and adventure hero in a tepid affair with very little science and no adventure. In this apocalyptic story, the Earth passes through a noxious nebula, and the characters are left with nothing much to do but sit around and watch the effects. The third Challenger novel, The Land of Mist (1926) is even worse. In this awful story, Conan Doyle unforgivably sells out his own character by subverting Challenger’s scientific skepticism in order to promote his own beliefs in paranormal activity. 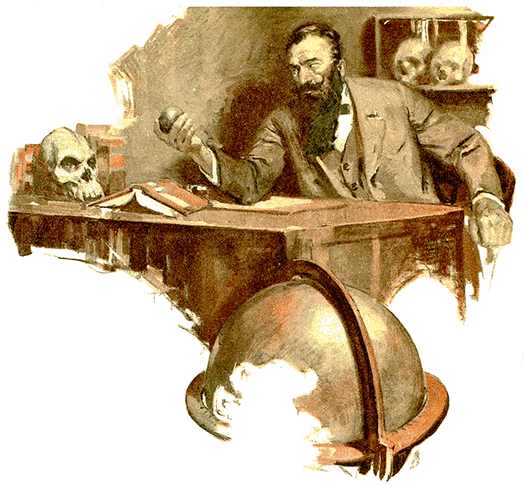 Thankfully, the two short stories are an improvement over the second and third Challenger novels, though their brevity leaves one wanting more. It’s too bad Conan Doyle didn’t produce an entire volume of Challenger stories, because these two turned out pretty well.
“When the World Screamed” (1928) — 4.5 stars

Unlike the other Challenger adventures, this story is narrated in the first-person by Peerless Jones, an expert in artesian wells and an old rugby buddy of Challenger’s journalist sidekick Ned Malone. Challenger hires Jones to join the team of his latest project. Challenger has bored a deep tunnel into the Earth, roughly 8 miles deep, in an attempt to pierce all the way through the planet’s crust and ascertain what lies beneath. He theorizes that the planet is actually a living organism that shows signs of respiration and circulation in its natural processes, like a gargantuan sea urchin. Though the science seems farfetched, the important thing is that Conan Doyle treats it with a ring of authenticity, which results in a well-written and entertaining sci-fi yarn, even better in some respects than The Lost World, though less substantial. At one point in the story, Mrs. Challenger is mentioned as still living, thus chronologically placing this story before The Land of Mist. Challenger’s great borehole might owe a debt of influence to Frank R. Stockton’s subterranean sci-fi novel The Great Stone of Sardis, published in 1891.
Read the story online at Project Gutenberg Australia.
“The Disintegration Machine” (1929) — 3 stars

A scientist named Dr. Nemor claims to have invented a machine that can break matter down into its individual atoms and then reverse the procedure to reassemble the disintegrated object—a process similar to teleportation but without the distance traveled. Assigned by his newspaper to investigate the matter, Malone takes Challenger along to meet the inventor. Nemor makes it clear that he intends to sell his device as a weapon to the highest bidder. This story is much briefer than “When the World Screams,” and it doesn’t delve very deeply into the science of disintegration. It is more of a Holmes-like caper in which Challenger and Malone must thwart a villain. The plot is pretty simplistic and the ending predictable, but Conan Doyle’s telling of it is still enjoyable and Challenger behaves in a matter true to his character.
Read the story online at Project Gutenberg Australia.
Posted by Karl Janssen at 4:53 PM